Brand purpose, much like the concept of challenger brands, is often misunderstood. Both ideas are frequently thought of as a function of marketing, rather than implemented where they’re most effective, which is core to business strategy and company culture. In a new book: Activate Brand Purpose, authors Scott Goodson and Chip Walker of Strawberry Frog argue for a deeper understanding of brand purpose and provide steps for brands to follow to realise its full potential. We caught up with Scott and Chip to discuss the key findings from the research for the book, which included the largest ever study of purpose-driven brands, and what behaviours we can learn from those brands using purpose successfully.

Does the world really need another book on brand purpose?

CW: We saw an opportunity in the marketplace around actually doing something with your purpose. Purpose, by its nature, tends to be kind of lofty. And we wanted to write something that made it much more tangible and actionable. There’s so much purpose-washing out there. So many companies and brands have jumped on purpose as a superficial marketing or communications idea, often to cover up bad behaviour on their part. We’ve seen that a lot over the years from brands like Pepsi and Gillette, and it gives the discipline a bad name. In truth, many companies believe in their purpose and do right by it, but we don’t hear as much about them.

SG: We felt that with the enormity of the problems out there - including, of course, this past year, it’s time for business leaders to drive positive change in our world. It’s time for business leaders and CEOs to move from intent to action. We don’t need any more talk about purpose. We’ve read Simon Sinek’s book about why we need a purpose, and now it’s time for action. We need leaders who will act and put purpose as a galvanising in the centre of the organisation so that the organisation grows and transforms and at the same time drives positive change. 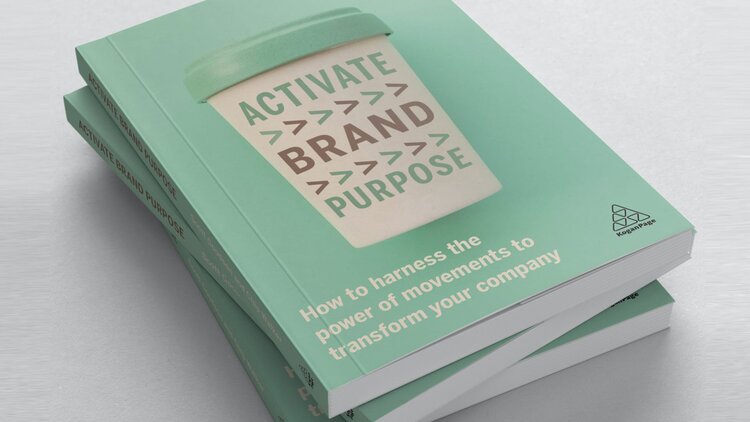 Why has brand purpose struggled to get beyond the walls of marketing?

I think that by virtue of purpose as almost a storytelling aspect of what the organisation does, it's left at the Chief Marketing Officer's door. The Chief Marketing Officer is the chief storyteller, and I think that's where purpose has lived. But I think CEOs and increasingly CHROs (Chief Human Resources Officer) and even CFOs are starting to see that purpose is a much more powerful tool for them to galvanise and engage their employees to transform the company. If you have a large organisation, and you want to transform that company, you need to change your employees' hearts and minds. You can't go from A-Z without that work. And that's the goal of the CHRO. So this moment in time is an opportunity for the CHRO to rise up and not be the compliance leader or almost an extension of the legal department. But rather be the chief people leader, which is also tackling some of the issues that employees face, such as emotional, physical, and financial wellbeing issues. So thinking about purpose in a much broader way is really what this book sets out to do.

You conducted a dozen interviews with CEOs and high-level executives and ran the world's first empirical study of purpose-driven companies in researching this book. What surprised you coming out of that research?

CW: We often get asked by journalists how purpose impacts the bottom line and whether it really makes companies more profitable. I think it's because journalists feel like that's what companies and CEOs are most interested in. But that's not what we heard from people at the top. The reason many CEOs are interested in purpose was for much bigger reasons than just money. It's an organising principle. It motivates employees. It gives all the stakeholders a reason to be interested in what the company does. So I guess that was a little surprising because the CEOs we spoke to were very high-minded and interested in purpose for reasons other than the bottom line.

SG: I think CEOs now intuitively realise that they have to play a larger role in tackling societal issues. Tim Cook, for instance, came out in support of the LGBT community recently. Many leaders have come out against new voting rights legislation in the United States, and they have a keen understanding of playing that larger role in society. We’ve worked, for example, with a health service organisation called Northwell Health. Their CEO Michael Dowling has published a book about how to deal with COVID. He recognised early on that health is not just about treating sick people, health is about helping people live better lives. So we helped Northwell define its purpose and helped to create a framework upon which he can talk about issues that are very much part of public health, such as gun violence in the United States, which is a significant issue, as is sustainability and climate change. So there are a lot of issues that impact health that are related directly to what Northwell do. But it’s not just your traditional role of treating sick people. And I think that’s where purpose, activated with movement-thinking can build a brand’s momentum for the future. And get away from the traditional verbiage and the wonky corporate speak. So purpose starts to take on a human form and a human-centred message.

What were some of the behaviours from the brands using purpose successfully that researched for your book?

CW: Involvement from the top is super-important. So not just marketing, or not mid-level or lower-level employees or younger employees who have an interest in purpose. But a commitment from the very top. We saw that over and over. A penchant for action over words is essential. So a willingness to do something with purpose, because repeatedly, over the last couple of years, we’ve had clients come to us and say, we’ve developed a purpose, but we don't know what to do with it. It’s just a slogan. It’s a poster on the wall. It’s on a coffee mug or something, but there’s no action. So the most successful companies act on it, and the way they act on it is also important. The most successful companies start activating their purpose on the inside with their people, and they activate it top-down, bottom-up and middle-out. So through all layers of the company.

SG: The other thing is to think about being a galvaniser. It’s one of the final chapters of the book and probably the most important. Organisational and business leaders need to ask themselves whether they are galvanising their people both inside and outside of the organisation. Why just run a business when you can lead a movement?

So of the 200+ brands and organisations you researched, who’s really nailing purpose?

CW: We conducted the Purpose Power Index research in 2019, which measured consumer's perception of which brands are most purpose-driven. We then repeated that research in January 2021 during the pandemic. We had seen early on that the most purpose-driven companies were purpose born like TOMS Shoes or Seventh Generation. But now we see the CEOs of some of the big guys publicly taking stands. One that surprised me a little was Elon Musk and Tesla. Consumers see Tesla as highly purpose-driven. I think conceptually, they are getting their purpose right, and consumers are recognising that.

SG: Tesla has built an ecosystem around its purpose to move the world to sustainable energy. Patagonia too ranked very highly, and they now offer a whole line of sustainable foods [Patagonia Provisions]. And that brings the power of what these brands stand for to new areas. And I think that’s an opportunity for companies moving forward. Allbirds scored incredibly well, as did Unilever-owned Seventh Generation because of their stance on sustainability. And you can imagine where this is going to go over the next few years as purpose-based companies become highly valued by consumers.

Does brand purpose like ‘delivering refreshment’ or ‘bringing joy’, that kind of purpose that we’ve become very accustomed to and perhaps mock at times, do you think that still cuts it today or is that increasingly from a different era?

SG: No, it’s a different era. It’s blind to the enormity of the problems we face. Purpose is about driving positive change in our lives, in our communities, in society or for the planet. If you’re not taking sustainability into account, if you're not taking into account diversity or equality, if you're not taking these issues into account, you are deaf, and you’ll be cancelled. Cancel culture is alive and well in the world. And we’re not talking about a tokenistic gesture once a year, but taking a stand consistently. A great example is Absolut Vodka which has been championing LBGTQ culture and equal love since the beginning and for 35 years.

Will we see a time when the measure of success of a large global business is not profit but societal impact?

SG: Yeah, I mean, it’s increasingly the yardstick against which companies are being measured in terms of results as opposed to simply profits. And I think the reality is, the Business Roundtable came out and said — not exactly these words, but the idea that Milton Friedman had it wrong: It’s not about shareholder value. It's not about just making money. It’s about stakeholder value. And Larry Fink, the CEO of BlackRock, has said he will only invest in companies leaning into sustainability. The world’s most powerful organisations, leaders, and financial institutions are discussing how we tackle these big issues.

What is Strawberry Frog’s purpose?

SG: Our purpose is ‘Creativity, for good.’ To create good results for our clients, for our teammates, and to drive good results in society and in people’s lives. And that really has been a motivator for us since we started. We woke up one morning a few years ago and said, ‘enough, we need to drive some positive change in the world.’ And in our book, we make a strong argument that it's actually in the interests of corporations to ensure that they don't kill their customers, that it’s in their interest to ensure that the water isn't toxic, or that people live with financial security. So it’s in the interest of companies to ensure that the world is tackling some of these bigger problems. So that's really what we believe in, and why we’re really passionate about activating purpose and why we wrote this book.

This article first appeared on eatbigfish's The Challenger Project website.