Probably the most iconic Olympic photographs comes from the 1968 Mexico Games: two black American sprinters - 200m gold medalist Tommie Smith and bronze medalist John Carlos - stand silently on the victory podium, heads bowed and fists raised in protest at the continued treatment of their fellow African American citizens. While these two are undoubtedly the main focus for me, I’ve always found my gaze drawn to the silver medalist, white Australian Peter Norman - the invisible Third Man. Australian Norman stares straight ahead, as if willing the protest over.

But this is not what actually happened. According to journalist Martin Flanagan on 'Smith and Carlos asked Norman (on the way to the medal podium) if he believed in human rights. He said he did. They asked him if he believed in God. Norman, who grew up in a Salvation Army family background, said he believed strongly in God'. They explained their planned protest he said simply 'I’ll stand with you'.

This is the kind of question that the dynamic duo of Paul Polman, former CEO of Unilever and Caroline Casey, speaker and advocate for 'differability' put to the audience at the latest “Under the Spotlight” event: when we see something wrong in the world in which we operate, will we stand up and be counted? ‘You say you care…but if you really do, do something about it’, as Polman put it in his quiet and insistent tone.

Hosted by CEO Gemma Greaves, these “Under the Spotlight” conversations put one or more brave leaders into an intimate but unflinching exchange about what matters to them. This time, by the end of the evening, the conversation got all of us in the audience on our feet, committing to force board-level engagement with disability/’differability’ in our own organisations. No matter our previous convictions.

There’s long been a debate in business schools and beyond about purpose-led business: about whether business should try to change the world in which it operates for the better of society at large. It seems a very fresh and modern thing to be concerned with things other than/in addition to business metrics but this in fact, a well-trodden path (the Quakers who founded some of the UK’s most loved brands like Cadbury and Boots would recognise much of the argument for purpose-led business in terms of what a business does for its employees specifically). Indeed, the current obsession with commercial metrics, is the interloper. As Canadian Professor Henry Mintzberg pointed out in his classic ‘Beyond Selfishness’: it wasn’t until the early 1990s that US CEOs decided that it was really hard to balance different stakeholder needs and interests that as a result, shareholder value would be the thing to focus on for them (as it remains for most until recently).

Refreshingly, the debate here was not just about advertising and marketing. It’s certainly not about the short-term impact of Nike’s ‘Take the Knee’ campaign - a subject that has burned a lot of social media time recently. Or whether ‘purpose-led marketing’ is just a distraction from marketing’s core responsibilities, as Mark Ritson and Tom Fishburne (Marketoonist) have both suggested. It’s not about whether purpose-driven marketing is the answer (it isn’t) but about how we marketers can lead business to be more use to the world at large: how we can change things.

The softly spoken Polman makes the case that, all of us need to embrace the responsibility as leaders to make the world a bit better than we found it. Polman argues from a very personal, somewhat priestly perspective - it’s clear that under his leadership, Unilever has had a positive impact on more than one billion people through its many programmes around the world. For Polman it’s rooted in personal morality. We in the developed world have won a ‘lottery ticket of life’ he says. ‘Greed is good but in the long run, generosity is better’. In his mind, the business results of this approach are compelling. His next step is to leverage his profile and unrivaled reputation to coral other business leaders to focus on the ‘tipping point’ moments for change.

Caroline Casey’s style is strikingly different - equally personal but with more of the advocate. Provocateur and rabble rouser, but she makes some very powerful rational points to add to Polman’s moral case. To her, it’s just good business sense to acknowledge the 20% of people of working age (nearly double that as we age) who have a disability, in the design of products, services, offices, workplaces, payment technology, as well as colleagues. But rather than just talking about change, she’s making it. She’s to building (with the help of leaders like Polman) a coalition of #Valuable500 - the top 500 companies committed to embracing ‘differability’.
Now you may be one of those who think that business should stick to its knitting; that we marketers should just pull tighter focus on the dollars and cents. To me, that’s an echo of what many people in athletics and the wider Olympic movement thought back in 1968, what the rugby and cricketing worlds communicated during the Apartheider, what the White House and the NFL thought in the face of San Francisco 49ers Colin Kaepernick’s ‘Taking the Knee’ protest. Keep politics out of sport, people like this always say. As if sport was a parallel universe to real life.

But it’s hard, listening to Polman and Casey under Gemma’s careful questioning, not to admit that it’s not only good business sense for business to acknowledge our wider responsibilities towards the society in which we lead; it’s a moral imperative for each of us to take a stand in the ways we can. Will you take a stand? Where? This is the kind of leadership all of us can aspire to. Bravo!

Event
Under the Spotlight with Paul Polman

Do we really care? 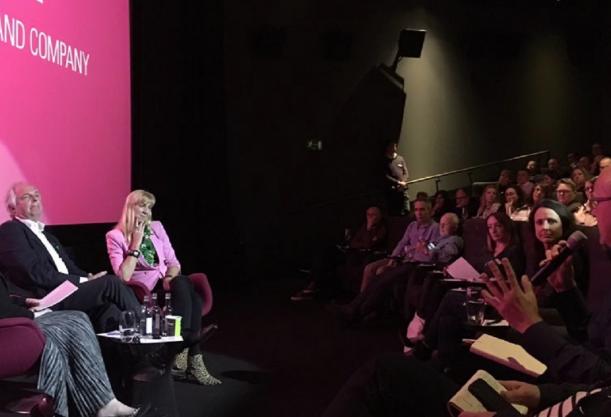 Is our purpose fit for purpose?