'Sport... for millions it provides an escape, not to mention a sense of belonging and community
Empower

'Sport... for millions it provides an escape, not to mention a sense of belonging and community.' Leo Burnett Sport + Entertainment's Liam Hopkins on the future for sports entertainment behind closed doors

Watching Sport. Some people hate it, but for millions all over the world, it provides a much-needed escape, not to mention a sense of belonging and community.

With the Covid-19 pandemic tipping the world upside down, we have seen sports brands leverage and maintain this sense of camaraderie, with home workouts and support for close-to-home charities. But, as we look ahead, what does sport behind closed doors actually look like? What do brands and rights-holders need to do now, to make sure their new-look products meet expectations?

Most sport fans (and, in the UK, football fans in particular) will want normal service to be resumed as soon as possible, providing it is safe for everyone involved. However, how can we ensure that the service that is eventually resumed isn’t just a pale imitation of the real thing - dull and void of the atmosphere and performance-enhancing feedback that, until now, could only be provided by a real live crowd? 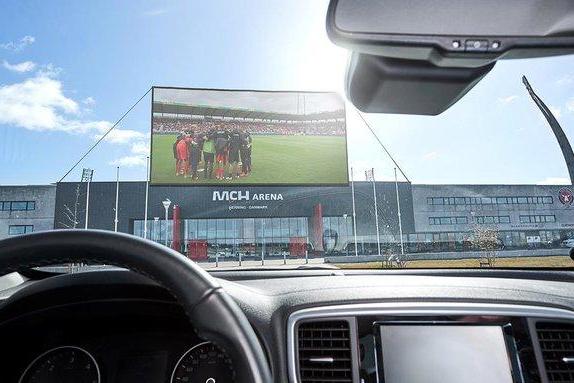 Danish football club FC Midtjylland, might have one answer to this. Recently they were reported to be planning a drive-in fan-zone outside the stadium, to help recreate this sense of atmosphere. Replacing the roar of the terraces, 94th minute winners will now be met with a rousing cacophony of horns. If sponsors (and car sponsors in particular) don’t find a way to get involved with these sorts of atmosphere-replacing activations, it will be a missed opportunity.

Knowing there are hundreds, if not thousands, of passionate fans cheering outside of the stadium, may just add the edge of excitement that viewers and players alike will be craving. At the very least, it will certainly give global broadcasters more interesting reaction shots than those offered by an empty stadium, or a more exciting soundtrack than faked noise dictated by fans at home.

Beyond this, we will, of course, also see more and more experimentation with the augmentation of the in-home experience. For a truly thought-provoking example, we just have to look to Barcelona, who are already looking to enhance the viewing experience with VR possibilities. There has even been talk of using micro-cameras to allow fans to experience matches through the coach’s eyes or players’ points-of-view. Now this might seem niche, but if the tech holds any water at all, do not be surprised if we see start to see its more mainstream implementation by broadcasters or brands on social media, as they look to capitalise on 2nd or 3rd screening habits.

However, the most immediate and mass-market opportunity is undoubtedly now the one proposed by the English Premier League. As we hear that the greatest club football competition in the world may be free to air on its return, sponsors will surely be rubbing their hands at the prospect of the enhanced exposure. This increased scale will not only extend to on-screen reach, but also the audiences sponsors can expect for their associated activation campaigns, on digital and social media. As always, best in class campaigns, will leverage populist creativity to deliver added value to consumers pre, during and post-match.

Will we see brands allowing fans to give out their very own man-of-the-match awards via Zoom? Or will they adopt a gatekeeper-like role, allowing fans the sort of live access-all-area content usually only seen on documentaries like Amazon Prime’s ‘All or Nothing’? Only one thing’s for certain - the rules as we know them in sports marketing will be torn up, in the quest to create an entertainment experience that can engage fans with the same scale, intensity and reliability as its live equivalent. Who knows, some of these innovations may even prove popular enough to stay the course when normality resumes.

All or Nothing Manchester City | Amazon Prime Original Trailer

In summary, it is clear we are heading into an unprecedent era for live sports. It’s an era that no one really wanted and yet now, somehow, everyone is desperate for.

Our thirst for its uncertainty of outcome and sense of belonging has never been greater, and it follows that the role for brands and rights holders has also never been more important.

The question we must all now ask is, what role can we play or what can we add to make this weird new era better for everyone?

This article was taken from issue 6 of Marketing Society publication EMPOWER. Read the archive here.