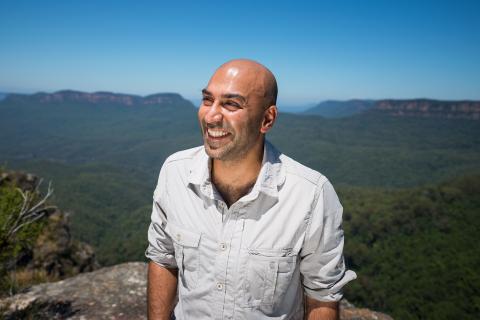 Amar lost his sight when he was 18 years old, but still wanted to explore the world. However, when he approached mainstream travel companies as a solo blind traveler, he faced rejection.

In the wake of this, and after a successful career as the head of finance at one of the UK’s largest international telecommunications firms, Amar decided to create Traveleyes.

His aim was to empower thousands of blind individuals all over the world to explore the planet as independently as their sighted counterparts, and, since the company was founded in 2004, it has gone from strength to strength as the world’s leading commercial tour operator offering independent group travel for both blind and sighted travelers.

The success of Traveleyes has seen Amar become a widely sought-after media personality and motivational speaker. His first television appearance in 2004’s Beyond Boundaries (BBC Two) saw Amar pushing the limits of human endurance as he and a team of other disabled adventurers trekked 220 miles across the entire width of Nicaragua, navigating active volcanoes and shark-infested lakes along the way. Since then, he’s explored the world of personal health for How to Get Fit Fast (Channel 4), guided a comedian through the hidden delights of Turkey for Travelling Blind (BBC One), and delved to the depths of ancient canyons for River Walks (BBC One).

More recently he’s been exploring the spiritual world as well as the physical one on Pilgrimage: The Road to Istanbul (BBC One), a three part series in which he and six other well-known personalities trekked the Sultans Trail pilgrimage route as part of a quest to understand their own faiths. As well as this, Amar has been cooking up a storm on Celebrity MasterChef (BBC One), becoming the UK series’ first ever blind contestant as part of his quest to show the world exactly how far you can get by refusing negativity and embracing opportunities to do something new.

Hear from Amar at our St Andrew's Day Celebration on November 30.