Mental health in the workplace 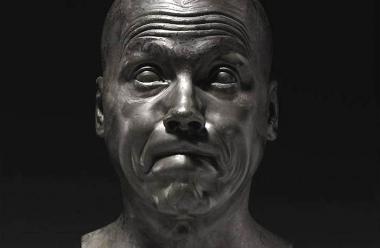 Blog post
While in Vienna last week I visited the art gallery housed in the baroque palace of The Belvedere.  In amongst the extraordinary collection of Klimts, Schieles and Austrian masters, one passes a room dedicated to the work of the eighteenth century Bavarian sculptor, Franz Xaver Messerschmidt.
Messerschmidt’s Character Heads depict the extremes of human emotion. They are twisted in laughter, disgust and despair. They grimace, gurn and gasp for breath. Initially one can’t help admiring their modernity. The heads seem to be declaring a horror at the world around them, at the absurdity and unfairness of life itself. They reminded me of Bacon.
However, the busts really are very disturbing. Most of them portray the shaven headed artist himself. He created the sculptures by pulling faces in front of a mirror.
Messerschmidt was a troubled man. His early work had observed the baroque conventions of the day. But he suffered illness and career setbacks. He developed paranoia, hallucinations and ‘confusions in the head.’ He left Vienna to live in isolation and he told one of his rare visitors that he had to sculpt extreme emotions in order to keep ‘malign spirits’ at bay. Today we would say that Messerschmidt was suffering from some form of mental illness.
'If I cannot move the higher powers, I will move the infernal regions.'
Virgil, The Aeneid, quoted by Freud
Over a hundred years after Messerschmidt’s death, as the twentieth century dawned, Vienna became the birthplace of psychoanalysis and a centre for the study of mental health. One might expect this of a thriving, progressive, modern city that claimed Sigmund Freud as a native. But Vienna was also in the grip of political upheavals and ethnic unrest. Urban life - fast paced, impersonal and endlessly changing - brought with it stress, anxiety and fears for the future. In art the confident, optimistic iconoclasm of Klimt was giving way to the neurotic angst of Schiele. There was a growing realisation that, whilst the modern age enabled huge advances in personal freedoms and material wellbeing, it was also exacting a heavy mental price. Fast-forward another hundred years or so to modern Britain. As we rejoice in a new revolutionary age of technology and transformation, news stories about stress at work and mental health in our schools and universities seem to be on the increase.
It’s not difficult to see why.
We’re putting more pressure on our young people to perform; we’re challenging our colleagues to change. We’re endlessly measuring and setting targets. We demand speed, agility, value and competition. Now. We set our standards by celebrity; we set our goals by prosperity. Our youth suffers social media stress and cyber bullying. Our colleagues face reduced access to housing and increased inequalities of income. They work harder and longer with diminishing job security and the office has become an unwelcome insurgent into the home. Our privacy is compromised; our security is jeopardized. And meanwhile the earth dies screaming.
For the creative professions these pressures are, if anything, enhanced. Creative people can sometimes be more sensitive, more paranoid, more ill-at-ease. It’s easy to discount these tendencies as the price you pay for original ideas. But if we value independence, unconventional spirit, eccentricity and the ability to ‘think outside the box’, we should also protect the people that embody these characteristics. We should be well aware that creativity can come at a price to mental health.
No one ever got fired for asking creative teams to work over the weekend. But maybe they should. I suspect that our industry continues to over-engineer solutions; to over-promise; and therefore to feel obliged to over-deliver. Our paranoia about losing business means that we run the risk of losing people.
I worry that the culture of ‘whatever it takes’ may not be fit for the modern age. I’m concerned that sometimes leadership piles on the pressure, when it should be taking it off.
Shouldn’t we be celebrating the leaders that deliver results without delivering collateral damage?
Isn’t the role of leadership to direct talent towards the optimal answers with the least possible waste?
Shouldn’t we think about sustainability in human, not just environmental, terms?
Creative businesses have a good record in pioneering office environments, diversity of employment, professional medical support and social responsibility. Shouldn’t we, the most exposed industry, be leading the way in providing world-class mental health care in the workplace?

www.jimcarrollsblog.com And read more from Jim in our Clubhouse.